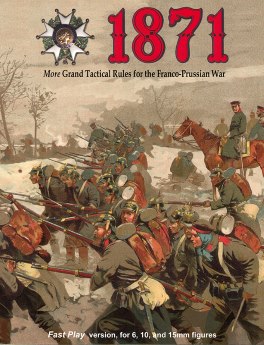 As winter draws on and daylight vanishes, my pursuit of the 1943 project has come to a halt. The next step involves a lot of painting, and daylight is a big help. Also I need 2-3 hour sessions, and these have been in shorter supply over the last couple of months. Instead I have returned to my original project: writing rules for army-level Napoleonic games. After so many false starts, I have had a bit of a breakthrough on this, and I am closing in on a prototype version that I can try out solo on the tabletop. It has been my main activity of the quiet Christmas period. Alas this is fast drawing to a close, and progress may halt again.

I have allowed myself one diversion, however. I bought a copy of Bruce Weigle’s latest rules: 1871. Bruce’s rules cover a later period than the one that I am interested in, but they have intrigued me. I have bought them all, apart from the original 1870 rules (apart from 1871, these are 1866 and 1859). These are fascinating wars, which I would take to the table if I had time. The evolution from Napoleonic times is interesting, and the struggle to adapt tactics to changes in technology is of real interest. I have not been very interested in the contemporaneous American Civil War, but these battles between the professional armies of old opponents in the Napoleonic wars seems to offer something that conflict doesn’t. One of the many aspects that makes it so interesting is that the armies were deeply interested in what actually happened so that they could develop tactics. That has left historians with a lot of detailed accounts of what happened; and the wars were short, which meant that fewer participants were killed before they could describe what they had seen (though the battles were often very bloody). No doubt it helps that standards of literacy had advanced too.

Two things drew me to Bruce’s rules. First was the simply wonderful presentation of his games, with huge trouble taken over terrain boards, for his 6mm figures. These look, much, much better than the fashion for 28mm miniatures allows; the pictures of these in wargames magazines leave me cold, in a way that I find pictures of bruce’s games inspiring. Even though I struggle on with my 15mm figures (20mm for WW2), there are many lessons to be had from his terrain boards. The second interesting thing is the rules themselves. They have been carefully calibrated against the course of historical battles, move by move. At the same time Bruce tries to make them as playable as possible. This is a struggle that I deeply appreciate, when so many rules focus on playability and half-baked ideas of historical authenticity. There is much to learn from this. I have played a few games of 1870 and 1866 with my friend George, who built up 6mm armies for the games, which has given me a better understanding of the system.

These new rules are particularly interesting. Not so much for the period covered – I’m less interested in the Franco-Prussian war than in the other conflicts – but for how the rules have been developed. Bruce’s mission is radical simplification. He says that they are much faster to play, while leading to similar results. That looks evident. The quick reference sheets are down to two sides from four. This means chucking a lot of detail and nuance overboard – things that historians may say were important, but which turn out not be. For instance: there is little distinction between different types of artillery. The Germans get a longer maximum range and a dice advantage. The French mitrailleuse is simply treated as an artillery piece with a shorter maximum range. This is ruthless, given how much ink has been spilt on this early machine gun. There is much to learn from how Bruce has achieved his stripping down. Incidentally, I see a similar ruthlessness in Chris Pringle’s Bloody Big Battles (BBB), though the choices are different. It covers the same period, but it is a very different game. My aim is to achieve something between the two for the Napoleonic era.

There was an unexpected bonus to 1871. At the back there is familiar section on how Bruce builds his boards (there are delicious examples in the book – including a table for Sedan with its city defences). He says little about these exhibition boards in this publication, but he does describe a much quicker way of creating quite respectable “test” boards. There may be some answers here for the creation of my tabletops, though these will never be in Bruce’s league. He uses a cloth pinned over polystyrene formers, with tape roads and acetate rivers pinned on top.

What of the rules themselves? They are what I describe as Corps-level rules. A single player will struggle to control more than one large army corps, though multi corps games feature in the scenarios, these will work best with more than one player per side. The ground scale is 1 inch to 100m (or 4m per mm). The basic playing piece is a stand with 30mm frontage which is nominally a battalion, organised in regiments of three. In common with earlier rules the 1871 rules give a “half-scale” and “quarter scale” variants. Both use the same distance scale, but the main units are battalions of two or four bases respectively. More interesting perhaps is the “two-thirds” variant, in which the main unit is a brigade of four bases, losing the correspondence of playing pieces with individual battalions. This is to allow bigger battles, like Sedan. There are a couple of interesting issues raised by this. First is whether the number of playing pieces should be based on army organisation (i.e. battalions), or on the numbers of men. Bruce has gone heavily for the former, as has David Ensteness his Napoleonic system Et sans Résultat. The argument is that the organisation structure drove the way battles were fought, and were written about. I’m not persuaded, and I would prefer to see the number of bases based on the number of men, setting the ratio to approximate to a battalion. Still, Bruce has made his system work, albeit he allows for a difference in average battalion size between the French and Prussian armies. How this works amongst the depleted formations of the later battles in 1871 I would be interested to know. A second issue is how well a rules system translates between different levels – how well does 1871 work at army and division levels? I suspect this is harder the more streamlined you make the rules, because different aspects are important at different levels. My view (following the world’s leading games designer, Sam Mustafa) is that different levels need different designs.

A further point about 1871 is its simultaneous move structure. When I started wargaming in the 1970s this was very fashionable. But since then (as indeed before then too), games have usually been based on alternate moves. I don’t want to develop the arguments here: but Bruce’s simultaneous system helps give the rules a simulation flavour, which is a nice contrast to the fashion the very “gamey” fashion of modern rules, such as Sam Mustafa’s. But it comes at a cost. It does require a certain standard of gentlemanliness  between the players (which, to be fair, I haven’t found lacking in my games) – and quite a lot of if-you-do-that-I-will-do this discussion. In fact quite a lot depends on who gets their move in first on the table. While playing I it did yearn for a bit more structure. But that’s just a quibble. I haven’t played them, but these new rules look a real advance on the previous versions, and they are better written too (the earlier ones left us with quite few “what does he mean?” puzzles and gaps), though the proof of that pudding is in the eating.

Could 1871 be used for Napoleonic battles? I’m tempted to try, especially when and if Bruce publishes his adaptation of the 1859 system to the new approach – the Sardinian army is pretty close to the Napoleonic smoothbore standard. Still, reading the book (which has welcome levels of explanation and historical illustration, I am very struck by how different the Franco-Prussian War is from was Napoleonic predecessor. At the moment I think David Ensteness’s system is the best for Napoleonic corps level games (to be clear, they are meant for army games, but with one player per corps). The 1871 system offers the potential for something more streamlined.

It is worth contrasting these rules with the other I have been studying for this period, if only for lessons in game design, which is BBB. BBB is an uncompromising Army-level game, though it is based on the Fire and Fury system for ACW, which is a corps-level game. By comparison, this feels much more gamey, with a less precise correspondence to historical reality. In particular the move distances look a bit low if the average turn is supposed to represent one hour. I have used the system in a full scale game only once, for Waterloo, and it was impossible for the Prussian advance on Plancenoit to be accomplished in the historical time. But its advocates use it to refight historical battles, and claim that it works well enough in general; I can’t dispute that.

If I ever do start wargaming this period (I fancy building an Austrian army), I will look no further than the 1871 system for gaming, with BBB as a backup.