Better late than never! Miniature Wargames has now published my article on Vitoria 1813. This is a signal for me to  get this blog up and running as proper public proposition. So far I have kept its light under a bushel.

The resources on this project referred to in the article, are on the Battles section of the site. This is the sum output of many months of research!

My current project is the production of my 15/18mm Prussian 1815 army, and the upgrade of a multi-period French one to oppose it. Some posts on this shortly.

Meanwhile the next version of my rules is slow going, as the rewrite is proving very radical, and so slow going. This is liable to be a bit quiet for now! 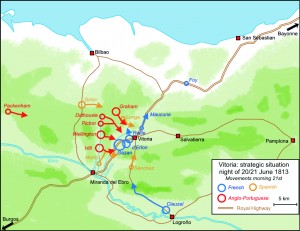 Finishing the resources I am posting for my Vitoria project, for now, I have posted a historical narrative on the battles page, together with a brochure on the battle published by Vitoria’s tourist office on the battle.

The historical narrative is based on an article I wrote a year ago, but which wasn’t accepted for publication. It was the first part of a two part series; the second covered wargaming the battle, and evolved into the scenario already posted. The editor wanted more wargame and less history. It is not very detailed, but gives a narrative that is much clearer, and I think more accurate than most versions that get published. That is partly because jean Sarramon provides a more complete narrative from the French side than the usual sources used by English-language authors, which throws a bit more light on things. Also my researches into the orders of battle gives a stronger grasp on the numbers involved than most. And I haven’t followed the British fashion of having large slabs of direct quotes from memoirs to carry large parts of the narrative. This can help provide an atmosphere and provide some interesting angles – but it isn’t really proper history. The historian needs to provide an opinion on how reliable theses accounts are.

The Vitoria brochure is interesting. It does not provide much in the way of historical narrative, although it has the best published battle map that I’ve seen – for showing the movements of the combatants anyway. it also provides some details and pictures from a more local perspective, which helps fill out the picture.