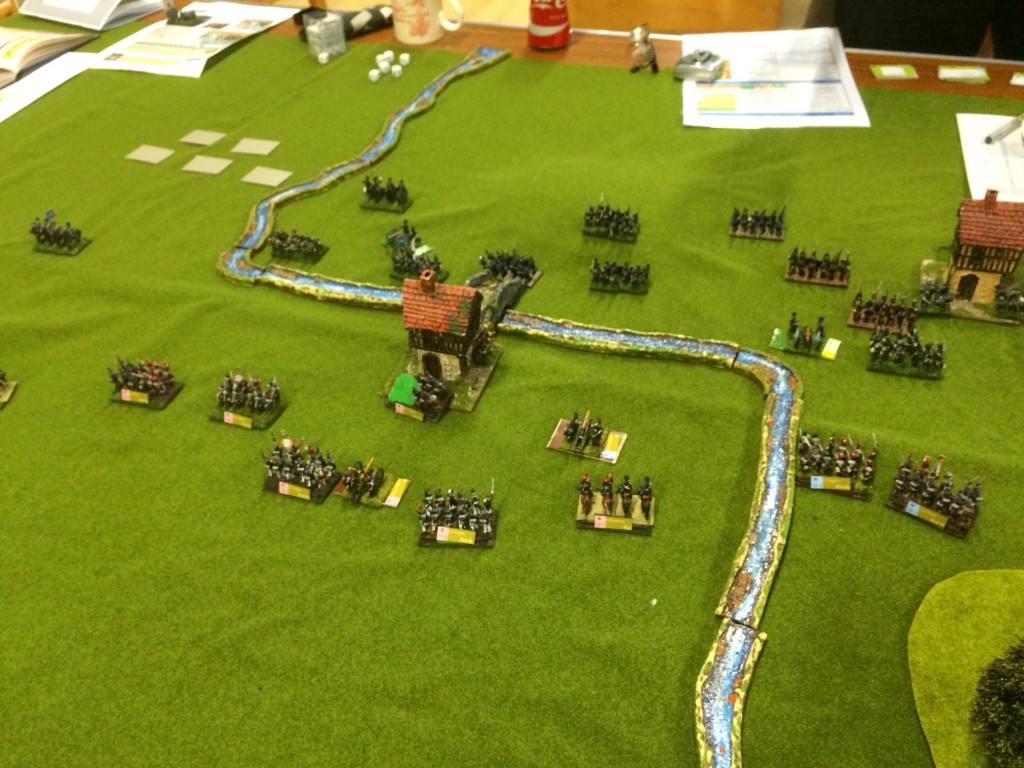 The idea behind my Dining Table Napoleon project was to get a game between two players on a dining table, that achieved satisfactory levels of historical faithfulness. There is one popular set of rules on the market that in principle fulfils that brief: Sam Mustafa’s Blucher system. Does it fit the bill?

It’s taken me some time to try the system out. A number of things put me off. First of all it is quite steeply priced. The basic rules cost £40, though it is quite nicely produced. Many add-ons can raise the price if you want to buy into the full system as Sam has created it. This is not something you can download for a fiver to check out. Second, I have been put off by Sam’s previous creations. I got a lot of mileage out of Grand Armée, Sam’s previous system in this field, but I have outgrown it. I have bought Lasalle the tactical Napoleonic rules in Sam’s Honour range, and played a game of Maurice, a set designed for 18th century. These were slick but too gamey. By that I mean too much historical detail has been sacrificed for free flow, and that players are pushed to design their game strategy and tactics around rules mechanisms, rather than something that looks more like historical tactical situations. In Maurice this included looking at a hand of cards and making choices as to which cards to play when. From all I could gather about Blucher it would be too gamey for my project.

But my perspective has changed a bit. One of my biggest handicaps in pursuing the hobby has been a lack of opponents in game play. I have a couple of wargaming friends, but no proper network. This year I decided to rectify this, and I have joined the South London Warlords. They meet on Monday nights in Dulwich, which is easy for me to get to, and even easier to get home from, so that I’m back early enough not to disrupt domestic life – though an evening’s game play is not the best preparation for a good night’s sleep. But, of course, entering a community means going along with other people’s wants and needs; that means playing the sort of games they want to play (including looking at other periods). And the challenge of playing games that are done in two to three hours is quite different to the one I am designing for – but exactly in the spot for Blucher. And that would give my miniatures a tabletop outing, and some payback for the many hours spent painting them up. So I decided to splash out and invest in Blucher. I’ve had two games with it plus a play at home trial. So how am I getting on?

First the good news. Sam Mustafa is one of the hobby’s top designers, and it shows. The rules are pared down, but have lots of subtlety. They are a big advance on Grand Armée. First of all units are represented by cards at the start of play, which are only replaced and revealed when they are discovered by your opponent or moved. This far from replicates the real knowledge gap in historical warfare, but it is an advance. You might want to invest something in reconnaissance. A second feature is a much more sophisticated system of command points to regulate movement. You throw two or three dice (depending on size of army), and this gives you a Momentum (or MO) score. Or rather your opponent does it, and keeps the result secret until you have used it up. It costs one or two points to move a unit. If units are close together it is easier to coordinate them. Contrast this with GA, where once you had activated a corps, you pretty much had free reign to move it as you liked, provided that you observed a command radius.

One consequence of this is that attritional tactics make much more sense than in GA. There it made little sense to indulge in preparatory tactics of artillery and skirmish fire. You were better off piling in with you first wave as soon as possible. But attrition costs no MO in Blucher. So it makes sense to move a group of units into range, and let them fire away while you use your MO to bring other formations into position. Also fire has been made a little more effective, and charge attack riskier for the attacker. That changes the balance of play in an interesting way, which probably reflects history better. Artillery, incidentally, is limited by ammunition, so it can’t keep banging away forever. Many other design details are pleasing – the movement system is simply but effective.

So, what are the problems? It is very gamey, as expected. Many favourite historical details are lost. Artillery can’t do overhead fire, for example, even though there are clear historical precedents (notably at Ligny, the battle that is at the heart of my current project). For my taste attrition warfare still depends too much on lucky dice throws, though much better than GA. And at least one thing is downright wrong. A unit can occupy and “garrison” a built-up area block with just one move of preparation. That makes it very hard to dislodge. In my second game the Prussians occupied a block with a landwehr unit of just five strength points. It took four rounds of artillery fire, and three attacks (twice with two units) to finally get in – costing 9 strength points, plus the artillery. This wasn’t a fluke; the rulebook says it is difficult. This is not how historical contests for build-up areas played out (again: look at Ligny) and seems to be shaped from translating the heroic contests of the granary at Essling or Hougoumont at Waterloo into a general rule for buil-up areas. This is one of the trickiest aspects of Napoleonic wargames design, admittedly, but Blucher has it wrong. There is a strong incentive to bypass occupied built-up areas in the rules; in real warfare they seemed act like a magnet to opposing forces. To be fair, something much more historical is feasible if defenders aren’t given their move to prepare – but to do that all they must do is survive one counterattack.

There are some minor quibbles as well. The quick reference sheet is spare to the point of being misleading, ignoring all-important exceptions. I tried creating my own, which put some of the missing bits out – but there were still issues. The idea of the MO die being thrown by your opponent is an interesting one, but it is problem for solo play. I tried re-throwing after each round of activations in my solo game, but this feels a bit too generous. Solo play is actually quite an important part of the hobby, and it is surprising that a set of rules that is so commendably market-focused doesn’t have some guidelins for solo play. The unit concealment rules are somewhat lost in solo play, of course, but not meaningless, as it affects long range firing.

The games themselves could have been more exciting. In each case the opposing sides consisted of 200 points (the recommendation is 200 to 300 points), with a Prussian army of 16 infantry and four cavalry units, playing a French one of 9 infantry and 6 cavalry; both sides had three artillery units. The French infantry was medium quality; the Prussians were diluted by 6 landwehr units, and 6 reserve units without a skirmish bonus. The French quality difference showed most in the cavalry. They had two elite cuirassier units, plus dragoons with a shock bonus; the Prussians had one landwehr cavalry unit. In all cases the French were on the attack; but lacked the depth of infantry resources to make any real headway. Technically the results were draws rather than Prussian victories, because neither side was broken, and the French still held an objective. But at the time we concluded, it was getting late, we were tiring, and there was game time enough for the Prussians to mount a counterattack on the exhausted French. I can’t blame the rules for this. The main problem was that (my)French battle plan flawed, and destined not to give a very exciting game. A better plan would have been to concentrate two corps on one flank to try and crush one of the three Prussian corps, while holding off the other two with the remaining corps. This strategic flaw was nothing to do with the rules being too gamey. It is true that a frontal assault between equally matched forces is likely to fail (actually unlike GA), but there is nothing unhistorical about that.

Another point is worth mentioning, though a bit tangential. And that is the visual appearance. My units (infantry and cavalry anyway) were comprised of two bases on 25mm squares placed side by side. With my 15mm figures this gives 12 infantry or four cavalry; this was in fact the system that the last incarnation of my in-house rules were moving towards. It was inspired by the strong visual appearance of similar but smaller scale units in Bruce Weigle’s 1870 system. But more than one of the other club members looking at our game suggested that it would look much better with 6mm figures on similar sized bases (which incidentally is how we played my Vitoria game in 2013). The 15mm units looked to small to convey the idea of mass formations of troops. The cavalry units of just four figures look particularly pathetic. Weigle’s system probably works for two reasons: first his terrain is much more detailed and draws visual attention away from the figures. Second, there just more units, closer together, in more interesting formations. On this last point, my current idea is to deploy my bases more flexibly into division-sized units, without a fixed formation. I think that will look a lot better. I stil think that a lower cavalry figure scale is needed so that more cavalry units are in play, though.

Terrain is a big issue with the club format, where you need to set things up quickly and flexibly. There is nothing in the rules that stops you from using a more realistic and detailed terrain format, of course, but I suspect it would clutter things up and slow things down. So we are left with relatively few terrain features, each of which is quite small in size (apart from rivers and streams, of course). Real physical relief is in fact a matter of complex systems of valleys and ridges, though, which is much harder to represent on the tabletop. You can get away with stripping the terrain for historical battles into something very simple. For example at Waterloo a longish ridge to cover the Allied position between Hougoumont and the Piraumont complex is arguably all you need. But I can’t begin to number the insights I have gained into historical battles by taking a much more detailed look at terrain features when setting up a game. For example that the farms of Hougoumont and La Haye Sainte at Waterloo are in hollows, and can’t be seen from the French positions, making direct artillery bombardment a problem. Bruce Weigle’s focus on the terrain is both stunning visually and the best approach to simulation. How something of that feel can be brought into more conventional wargames is a problem I am wrestling with.

And Blucher? It’s worth some more outings at the club, though the games need to be made more interesting.I may well start to warm to them more.  But it is not an alternative to my own Dining table Napoleon rules, still in bits, unfortunately. 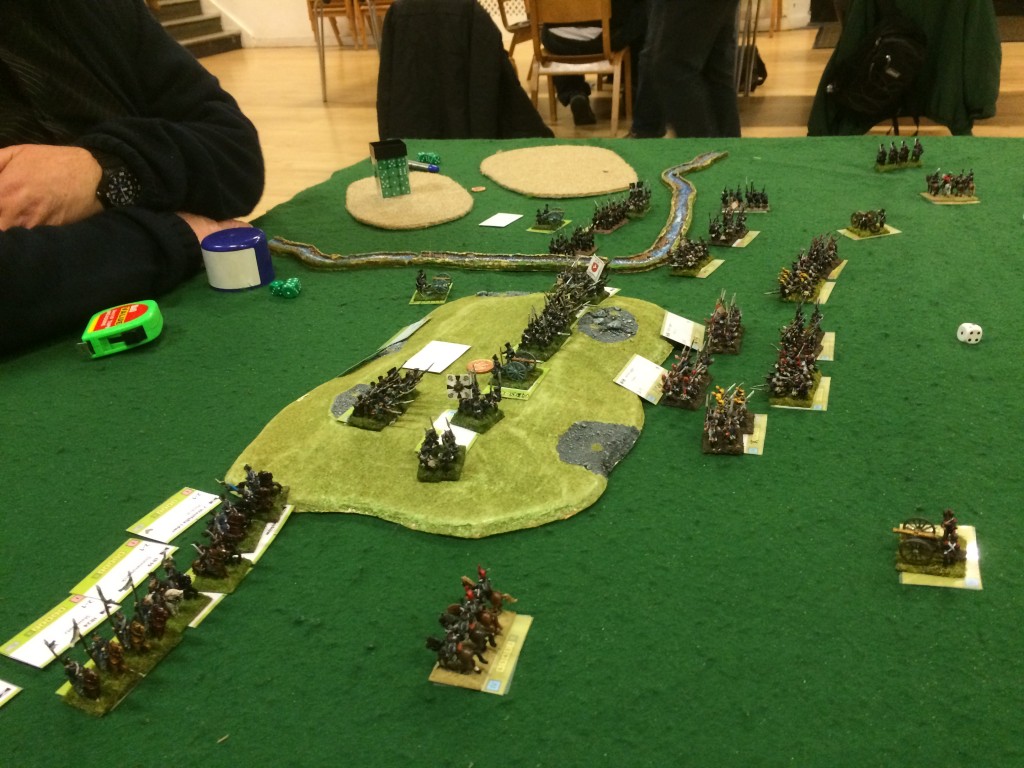 6 thoughts on “Blucher: does this system fulfil my brief?”