My first item is the 4pdr Gribeauval gun. I’ll start with an introduction to the
Gribeauval system. Gribeauval was an officer who learnt much of his trade in the Austrian army, and who overhauled French artillery in the 1770s. His name has become practically synonymous with French artillery of the era.

Gribeauval instituted a whole system – this included artillery pieces, carriages, limbers and caissons, and standard methods for moving and handling the guns. This level of standardisation was revolutionary, and resisted at first. But it brought French artillery of era up to being the best in the world.

Gribeauval’s artillery had a number of characteristic features that gave them a distinctive appearance, when compared to other artillery of the time. They had big wheels, an elevating plate and screw underneath the barrel, the trail had a distinct kink and a curved end, the axles were metal rather than wood, and there were distinctive trail handles poking up from the middle of the trail brackets (part of the system of manoeuvring the piece). Apart from the elevating plate (not visible) and the trail handles (not present on this example), these are visible on the picture of a 4pdr above (captured by the Portuguese at Vitoria in 1813, and probably originally in Spanish service). Soft metal models, such as the miniatures I use, do not attempt to model the axle, which is rather thin, but otherwise all these features should be part of a model.

Three field artillery pieces were part of system: 4pdr, 8pdr and 12pdr. A 6in (or rather 6 pouce; pouce = thumb =inch – the French inch is distinctly bigger than the Imperial one now in use) howitzer is also associated with the system, but this was introduced in the 1790s, or perhaps slightly earlier. More on that later. The 4pdr was associated with horse artillery (or light artillery in French terminology).

But the lightness of the piece came at a cost in hitting power, and there was also a cost to not standardising ordnance across the light and field arms. In most field conditions it was perfectly possible to use the 8pdr in the horse artillery role, and this was frequently done. So the 4pdr was scheduled to be phased out by the time we reach the Imperial era, when a 6pdr was to replace both the 4pdr and 8pdr.

But it lived on in three contexts. First because it took time to replace it in early campaigns; there still quite a number used by horse batteries in the 1809 campaign against Austria, for example. Second, in Spain and Portugal the rougher terrain and type of fighting made it lightness more useful, and in any case they took over quite a few from the Spanish army, which had also adopted the Gribeauval system. It was the most often used calibre for divisional batteries, as well as horse batteries, there. More were in use at Vitoria as late as 1813, than any other calibre. And thirdly they were used as regimental artillery in the campaign against Russia in 1812.

I have quite often run Peninsula battles, and have an eye on the early Imperial ones, so I wanted quite a few of these: six in fact. I’m lucky though, because the Battle Honours “Light artillery” pieces are quite a good fit, and I’ve got lots of them. These may in fact be meant to be 6pdrs in a smaller scale (BH are generally smaller than 1/100), but no matter. The barrel is about right; the carriage is a bit long, but not by much. The wheels would do, but are a bit small  (they should be over, not under 13mm in diameter). As it happens I have plenty of wheels of the right size from BH 8pdrs or Old Glory artillery – I substituted the latter. Another nice thing about these models is that the elevating plate is high enough (just – the tube does point up a little). Sorted. Here are a couple of pictures of the end result, with an 8pdr for comparison. The crews are Old Glory horse artillery, and the basing is the old one. My miniatures photography skills need a bit of work too: 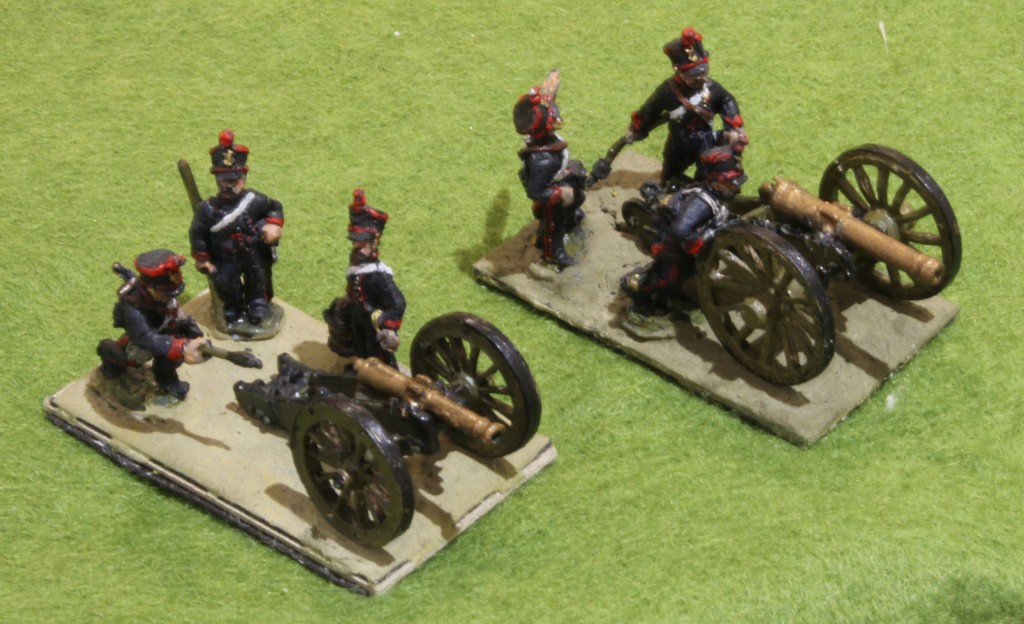 But for any readers who want to make 4pdrs from what is currently available, this is not a viable route. I bought my models when BH were a going concern and sold their artillery in packs of three, without crew. They then went out of business. Recently they resurfaced, sold by TimeCast in packs with crew. TimeCast have stopped selling them but OldGlory15s.com in the US still seem to. But I don’t know which pieces are in which pack. I would be guessing if I suggested the horse artillery had these! Besides the figures are a bit small and will probably be unusable (the Guard Horse artillery ones certainly are); the 8pdrs and 12 pdrs might provide a few usable parts but no more.

A better bet are Blue Moon. These are about the only manufacturer producing new models in this scale right now. The have an awkward practice of selling their artillery in packs of 6 for £12. But according to LittleArmies they are quite similar to the BH ones, only with wheels that are even smaller. You can choose to live with this, or you can try hunting for bigger wheels from somewhere. Mine were from Old Glory (French horse artillery – but Prussian foot artillery would do also). At least the crew figures are more usable than those from BH, though I generally prefer Blue Moon. A think the big-wheeled look is so part of the appearance of French artillery, that I would find the small wheel size very off-putting.

AB, the Rolls Royce of 15mm figures, don’t do a 4pdr. Old Glory provide standard 8pdr carriages with different barrels. Warmodelling do the same, though I haven’t bought their 4pdr (I have the 6, 8 and 12pdr and howitzer, to my great regret – they are pretty much unusable). Minifigs do a 4pdr, but I’m wary after trying their howitzer, which came out too small.  I can’t speak for anybody else.

Next article: the 8pdrs