The French 6pdr, introduced after 1803, may have been the most produced artillery piece in the Napoleonic Wars (the Austrian 6 pdr, produced over a longer period, may have rivalled it – or perhaps the Russian 6pdr). The  Russians alone had captured over 184 by 1813 (mainly through the 1812 debacle, no doubt). Many more were cast in 1813, so that at Waterloo Napoleon had 142, not counting Grouchy’s corps. Compare that to the 92 8pdrs in use in 1806, as production ceased, according to DDS. And yet in most literature, until recently, it was as if this weapon did not exist. A picture of one in Chandler’s standard work The Campaigns of Napoleon is described as an 8pdr. Unfortunately 15mm figure manufacturers have taken their cue from this silence. So finding models of them to support a 15mm French army has been more than a small problem.

The 6pdr was the central product of the An XI review of French artillery instituted by Napoleon in 1803. It was to replace both the 4pdr and 8pdr, allowing more standardisation across the army. The advantages over the 4pdr were easy to see – the feeling that the lighter piece was not up to the task was widespread. The replacement of the 8pdr was more contentious. But in Napoleon’s view the advantages of the heavier weapon were trumped by those of the new one. Perhaps he could see, in a way that junior artillery officers could not, that lighter weapons meant more of them.

It was also a step towards standardisation with other armies, allowing greater interchangeability of ammunition. The 6pdr was the standard calibre for all other major nations, and most of the minor ones too. Although each nation’s version of the pound was different (there were about 8 French livres to 9 English pounds, for example), the calibres were generally more similar than this might suggest. According to DDS the French 6pdr had calibre of 96mm (to the nearest mm – this was not a precision age), and so were the Austrian and Russian weapons. For the Prussians it was 94mm, though, the British ploughed their own furrow with 93mm. Interestingly the Austrian ball was quite a bit smaller than the French one (just over 90mm compared to 94mm), but the charge behind it was 93mm. All this meant that some interchangeability was feasible, although the dynamic properties would have differed.

The new French 6pdr was part of a more general redesign. It inherited a some of the design features of the Gribeauval system – the big wheels and the less angular look (though the trail was straighter) – but it changed a lot too. This included peripheral features such as the carriage of the ammunition coffret (the small chest carried on the trail in the old system), and the use of trail spikes to manoeuvre the piece – which gave raise to the distinctive trail handles. The result was a piece that bore a family resemblance to the old 8pdr, but was notably different. The barrel was shorter and much lighter. In common with most other An XI barrels, it did not have the central reinforcing rings, giving it a smooth appearance that is distinctive from all or nearly all its peers in other nations. The carriage was about the same length as the 8 pdr, but lighter, straighter and had the characteristic upturned end. There were three rather than two sets of metal reinforcing bands on the trail, with the front two in different positions. And there was no second set of trunnion recesses for transport mode. There were no trail handles, no recesses for the coffret and the iron axle was encased in a larger wooden one.

All this was too much for the field officers, who criticised the new weapon compared to their beloved 8pdr. The new design was said to be  not as robust. In response, modifications were made. Back came the trail handles and the coffret recess; the wooden axle casing went. DDS says that the barrel was redesigned to be much bigger: “in effect, a lightweight version of the Gribeauval 8-pdr”. All these changes together they refer to as the “M1808” system. But how radical were the changes in fact? From a modeller’s perspective they appear to be pretty superficial. There is a drawing of the “new” weapon in DDS, and pictures of a scale model in the Musée de l’Armée at Les Invalides. Added to that evidence is the above picture of an example of an actual piece in Les Invalides (dating it is said from 1813 – though probably only the barrel’s date is known for sure). I have found a much older picture from les Invilades of what is surely the same piece: 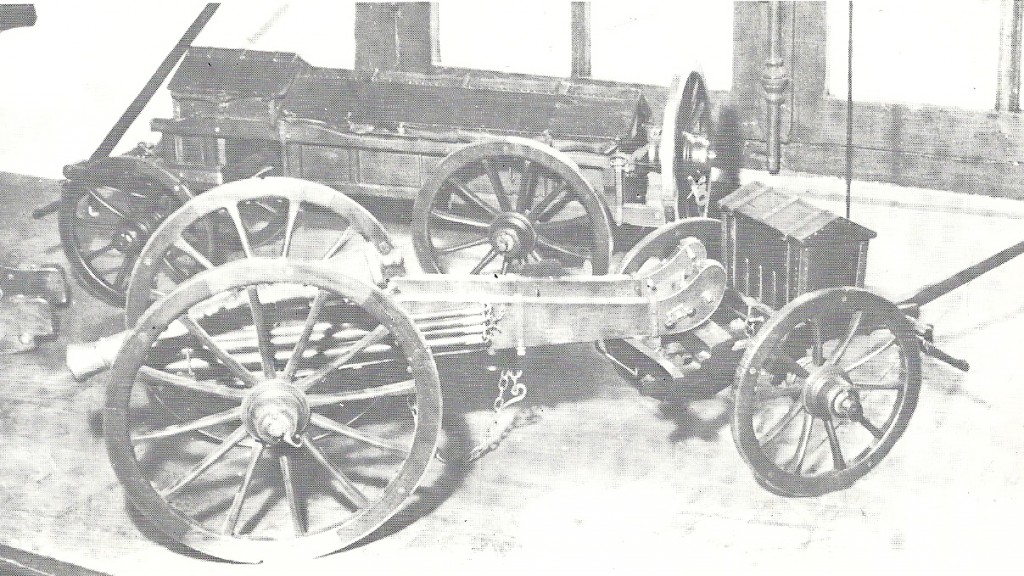 It is clear from this evidence that carriage much the same as before. It’s the same shape; the bands are in the same places. That leaves the almost superficial detail of the trail handles, with the recesses for the coffret and the axle representation not being things that a typical 15mm model deals with.

And what of the bigger, heavier barrel? The barrel in the drawing has the same dimensions as the original, and that seems be true of the two photos too. The Royal Armouries has no less than 9 French 6pdr barrels, captured at Waterloo and all cast in 1813 (five in France, three in the Netherlands and one in Italy). These are 166cm or 168cm muzzle to breech ring (four of the French ones are 166cm; one of the French ones and one of the Dutch ones is 168cm, the lengths of the others isn’t mentioned in the Armouries catalogue) . The French ones are all 390 to 392Kg (the one measured Dutch one about 380Kg).  According to DDS’s statistical table the original barrel length was 166cm and weight 390Kg. Their “M1808” version is described as being 180cm and 392Kg. The 180cm measurement appears to include the button at the end, where it would conform to the 168cm Waterloo ones, and the weight is the same as the old version – so it doesn’t look as if they have firm data for the “M1808” barrel. The 1813 barrels conform to the original 1803 pattern, and I have yet to see any decent evidence that the heavier barrel was actually ever produced. Of course they might have been, and in the desperate circumstances of 1813 they might simply have gone back to the earlier design because of metal shortages. But show me a real living example of the bigger barrel!

Here is an extract from the Royal Armouries catalogue showing the entry for one the 6pdrs; note the lack of central reinforcing rings – and the notes on dimensions. The howitzer entry below it is also interesting, but more of that in my next post. 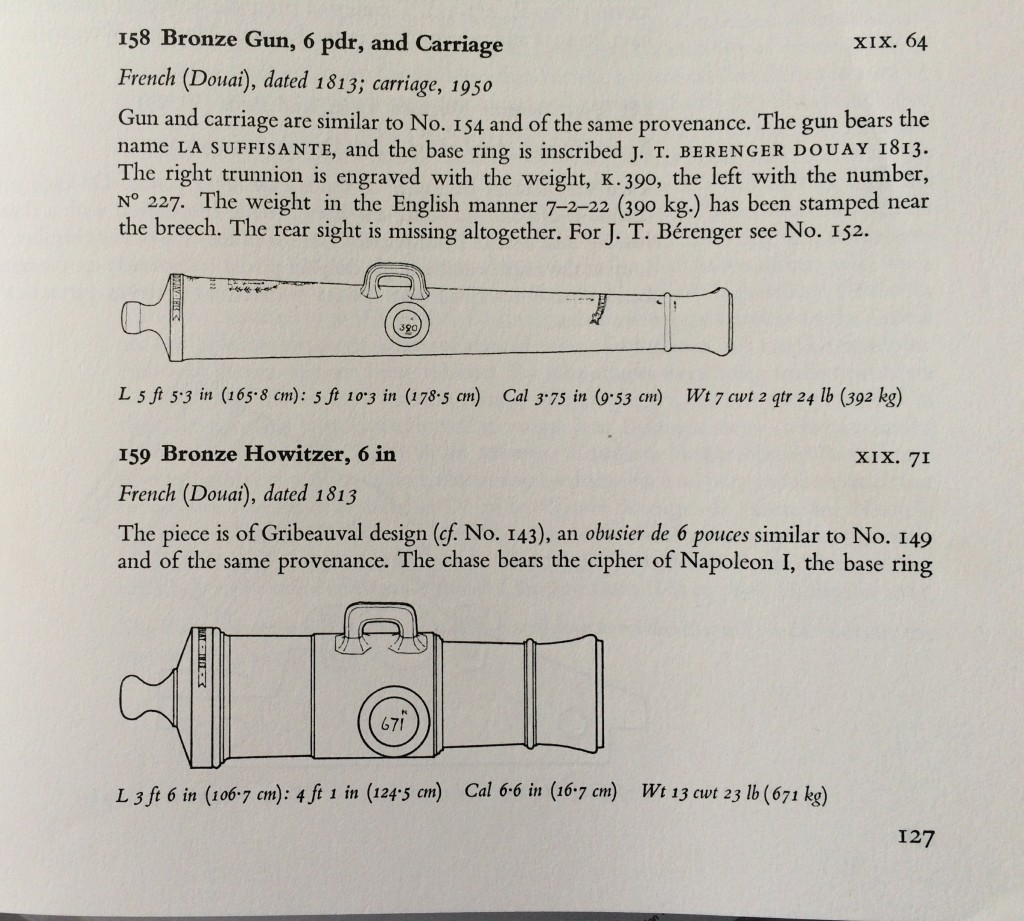 A further development is mentioned in DDS. It is that in January 1814 Napoleon ordered that old 8pdr carriage was to be adopted for all field ordnance, including the 6pdr, the 12pdr and the howitzers. But I wonder what evidence there is that this was ever adopted? Alas the carriages from the Royal Armouries 6pdrs were lost in a fire in the 19th century. Six of the barrels are on display at the Tower of London, but on modern (1950) reproduction carriages, based, I understand, on the Gribeauval 4pdr. My working assumption must be that the Waterloo 6pdrs looked like the example in Les Invalides.

And so to my models. In my collection I had three AB 6pdrs already. These were the only attempt at a 6pdr available at the time, but I found them deeply unsatisfactory. Firstly the wheelbase was much too wide – wider, even, than the 12pdr. But this may have been corrected somewhat since, judging by the LittleArmies blog, though still out by about 1mm. Second the carriage is simply an 8pdr one without the second trunnion recesses. The trail handles are also missing on mine – though these look as if they have since been added in, judging by the picture on the Fighting 15s website (and LittleArmies’ blog). There is no upturned trail end. The trail is bit narrow and straight rather than splayed, as with the 12pdr, but I am not so worried about that for the 6pdr, and it looks fine next to the AB 12 pdr anyway. This might be a fair representation of a post 1814 carriage, but I don’t think that there were many of these, if any. Unfortunately in the confusion over my last reorganisation all the barrels got muddled up, and I can’t comment on the accuracy of the barrel length. But I can say for sure that it has central reinforcing rings – and they’re still there.  Apart from these admittedly major problems, the usual very high standard of detailing from AB is there. I decided to keep them, but with 1mm or so taken off each axle end, and with the central reinforcing rings filed off the barrels. Whether these barrels are the originals, or whether they come from Battle Honours (BH) 8pdrs I can’t say!

Also from my bits and pieces, I had some old BH Prussian 6pdrs. The carriage looked rather suitable, being of the right dimensions, and with the trail bands in more or less the right place. With new wheels (taken from Blue Moon French or Prussian pieces – which I may yet regret when I come to complete my Prussian artillery project) and barrels from AB/BH, with the central rings filed down, I had a passable version of the original An XI 6pdr.

But I need serious numbers of the 6pdrs for my 1815 games, and if I ever get into 1812 and 1813/1814. I set a target at this stage of 12. That means I couldn’t just mess with my existing bits and pieces, I needed new stock. Fortunately, there’s a new kid on the block: Blue Moon. They do a 6pdr (in the usual packs of 6). This does have some issues. The barrel has the central reinforcing rings (and the dolphins are a bit vague), and the elevating plate sits far too low. The trail cheeks are also a bit thick. But filing down the barrel and with a new plastic card elevating plate (I simply glued the back end of one to the back of the barrel) and we were away. This is a very acceptable model. I have six of these to bring my total to 12 – and I know I can knock up many more if need be.

Here are the three variations with the usual crew figures. At the front is the BM, next is the AB, behind that is the BH Prussian conversion, and finally the 8pdr for comparison. 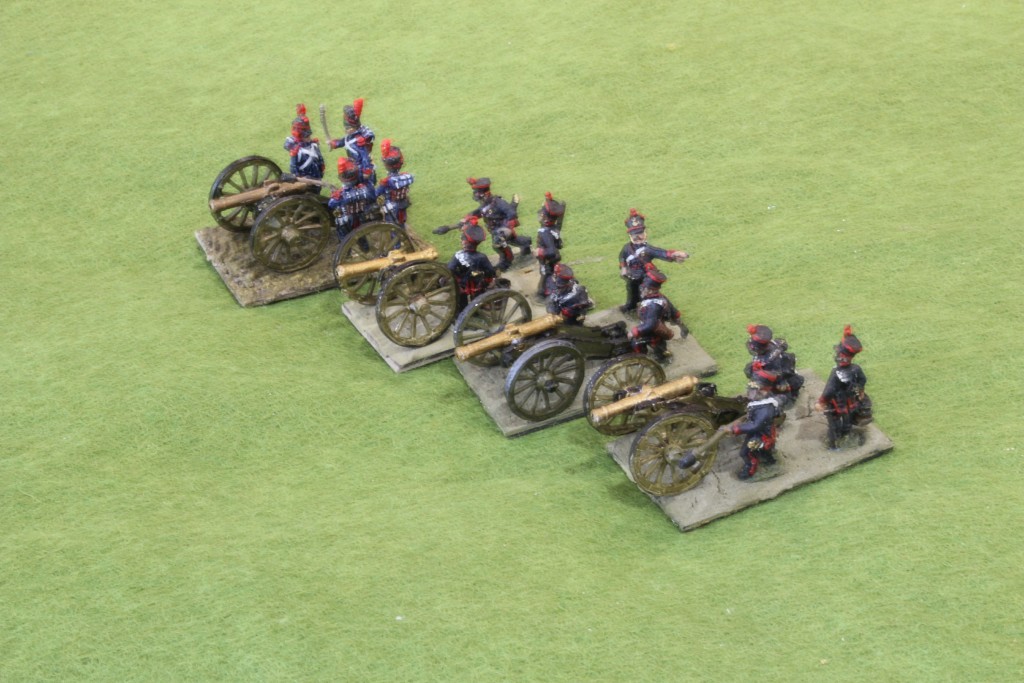 Here they are again, without the crews, from right to left: the 8pdr, the BH Prussian conversion, the AB and the BM.

And a comparison of the the AB and BM models. The AB with the classic bent 8pdr carriage is to the left. It is difficult to see the shape of the BM model, but there is a marked uptick at the end of the trail, though not as marked as the real thing. The BM model is freshly painted for this photo, and could do with a little touch up, at bits of white undercoat are showing through! The AB carriage (not the tube) is an old paint job, with a darker interpretation of the carriage colour. 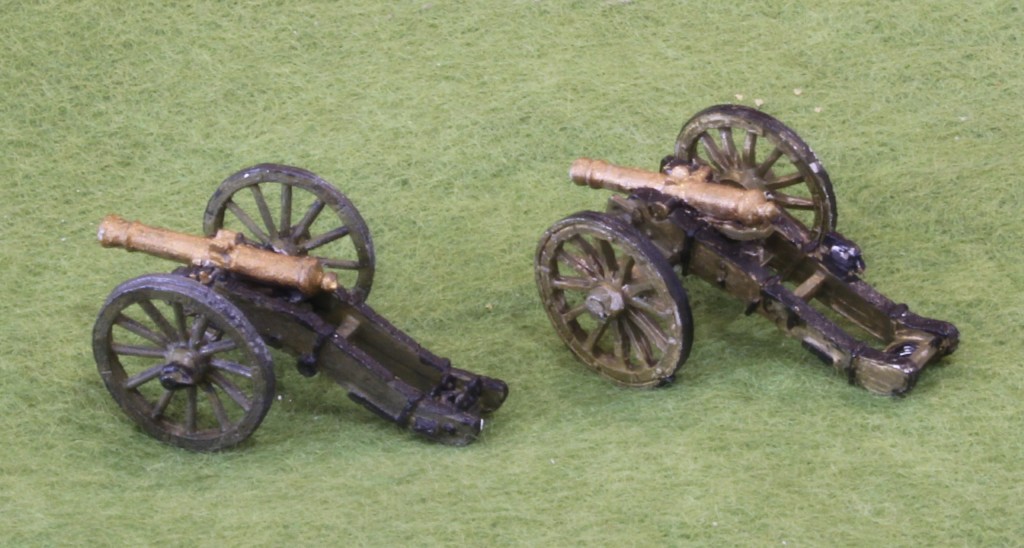 If you are starting from scratch I would recommend using the Blue Moon 6pdrs, with the same modifications noted above if those details bother you. The only serious alternative is the AB version, which is at least available singly – but you may have to narrow the wheel track, and really should file down the barrel rings.  Warmodelling/Fantassin claim to do a 6pdr, but I wouldn’t touch it. The carriage is all wrong, and not very nicely modelled either. I have not actually seen any others.

Next article: the 6in howitzers