This book (published in 2007) has become the definitive book on the great battle of 1812, as the Russians 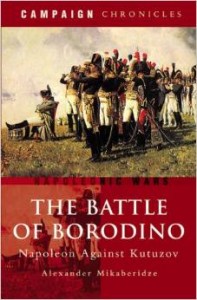 sought to stop Napoleon as he approached Moscow. It is not quite the biggest or bloodiest battle of the era – but it wasn’t until the First World War that as many combatants were killed in a single day.  It lies almost at the point when Napoleon’s military career turned from triumph to disaster. Both sides claimed victory. Tactically the French had the better of the day – with the Russians abandoning the field overnight. But the Russian army was unbroken, and soon enough turned the tables on the French.

One of the many recent developments in the writing of Napoleonic history has been the availability of Russian sources. The Russians kept rather extensive records, perhaps contrary to western European prejudices. However in the Soviet era history was regarded as a purely political exercise. Access was restricted only to historians who would offer a politically correct version of events – which meant glorifying the Russian achievement rather than trying understand what happened and why. Mr Mikaberidze examines the sources afresh, as well as giving interesting details on the historiography of the battle.

The book mainly focuses on the events of the the three days: the battle of Shevardino on 5 September, the main battle on 7 September, and the moves on the day in between. Events leading up to the battle, and after it, are covered only briefly – though he does review the criticism of Barclay and his replacement by Kutusov in some depth. The point of view is distinctly Russian, which compensates for the distinctly French-sided view of earlier histories in English – reflecting the availability of sources, as well as the language skills of British and American historians. Which is not to say that the French-Allied side of things is neglected in this book.

What the book does best is to analyse each episode. He describes the various accounts, and then evaluates which he thinks is closer to the truth. This is good, solid history. He doesn’t follow the fashion of adding colourful novel-like descriptions of events, filling in the missing bits from his imagination. Or the alternative fashion of relying too heavily and uncritically on eye-witness accounts to carry the narrative. He does quote eye-witnesses extensively – and this gives a lot of colour – but he evaluates them too. Controversies are dealt with in some depth. By the way various myths are dealt with – for example that the early death of Russian artillery commander Kutaisov meant that many Russian reserve batteries were never deployed. This is just untrue.

If the book has a failing, it is that the analysis does not go up a level. I find two issues of particular of interest. The first was Napoleon’s conduct. Mr Mikaberidze pretty much accepts the standard view that had Napoleon been more vigorous he could have achieved a much more decisive result, missing more than one opportunity – most famously not committing the Guard, but also exploiting some of his earlier success more decisively. Interestingly this view is not shared by the great military philosopher Clausewitz – who was actually at the battle, working for the Russians as a staff officer. This is quite interesting. What would have been the practical outcome of a “more decisive” result? It would not have hastened the capture of Moscow, which Napoleon thought would end the war. Neither, on the way things actually worked out, would it have made much difference to the catastrophe that enveloped the French later. It might have taken a little longer; the French might have got a few more men out. Would these extra achievements have warranted extra risk or damage to the Allied army? A discussion on this would have been illuminating – and may have gone some way to explaining Napoleon’s apparent apathy. He surely was physically ill – but perhaps he saw no reason to rise above that. The reason that the French Empire’s glory days were behind it was less perhaps that his generalship deteriorated, and more that his opponents made fewer mistakes.

A second question I find of interest, given my interest in simulation – though it’s not one that I have seen discussed properly anywhere – is the discrepancy in losses between the two sides. The French-Allied losses across the two days of battle were in the region of 35,000 men from an army of over 130,000. The Russians had a similar number of men, or perhaps more, although it included 30,000 or so Opolchenye – militia of much diminished military value, that was not heavily engaged – but their losses were significantly higher – perhaps as many as 45,000. Given that they adopted a defensive posture, this raises the question of why they suffered higher losses. A similar discrepancy does not emerge in the great battles on the Marchfeld against the Austrians in 1809. The Russian tendency to use dense formations in the face of artillery fire is often mentioned – but the French clearly attacked in dense formations as well. To me it speaks of the highly effective use of artillery by the French army in support of its attacks – though it is still a bit of a mystery. It also is striking that no major formation on either side broke. This may reflect the nature of the fighting, as much as the motivation of the troops.

These are quibbles though. There is a lot of material in the book that will allow simulators to gauge the realism of their models. This book inspires me to take this battle on as a future project. Even if hat will not be for some time to come!