This book covers a neglected episode in the Napoleonic wars: the British 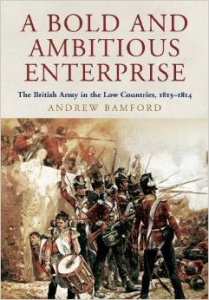 expedition to the low countries (on the modern Dutch-Belgian border), which had its climax in a disastrous attack on the fortified town of Bergen-op-Zoom. It is written by Andrew Bamford, and it is a thoroughly competent work. It forms an intriguing backdrop to the Waterloo campaign rather over a year later.

There isn’t a huge amount of history to tell. The book briefly covers an earlier episode when British troops cooperated with Wallmoden’s force, including the battle of Gohdre. There were three actions of significance. Two attacks on the Antwerp suburb of Merxem, and the attack on Bergen-op-Zoom. Mainly the book is about the dealings with the nascent government of the Netherlands under the Prince of Orange, and various Prussian, Russian and Saxon allies, as well as Bernadotte, as Crown Prince of Sweden. This is an interesting vignette on how allies behave to each other, weigh strategic priorities and behave with incomplete information. The way in which the British scraped together the forces required for the mission, in spite of Wellington’s still raging campaign in Spain and the south of France, as well the USA’s attack on Canada, is also interesting. The force was an odd mix of veterans and raw troops. Its leaders, from Peninsular veteran Graham down, where generally quite capable.

The writing of military history in this era is no longer a mainstream pursuit, and is largely left to enthusiasts and amateurs, with the odd professional whose main expertise is elsewhere. So the quality tends to be very uneven. Mr Bamford handles his task confidently, being able to tackle grand politics down to small-scale tactics with ease. Some of his arguments about who was to blame for what, building on old controversies, is a bit laboured, but overall the book is very well written. Thankfully he resists the temptation to fill in colour (“the sun glinted on the frosted trees, etc. ..” Yuk!). In common with so much British writing, the sources are almost entirely British; for all that it does not feel biased.

I have only a few quibbles with the book. The maps aren’t very good. A strategic map would have been useful; the general map of the campaign area is very bare. The plans of Bergen-op-Zoom are not as helpful as they should be (I can’t tell the difference between ditch or rampart; there are no streets) – though the ones of Merxem are good. On the great battle itself I was left with a puzzle. The most important question to my mind was whether if the largest incursion, made by General Cooke with the Guards, amongst others, had been more active, could the town have been taken? This is mentioned as question, and Cooke’s passivity is criticised – but an analysis of his options and how plausible each was would have been useful. Could he have forced his way through to the Antwerp Gate and secured it?

What else did I get from this book? I am struck with how well even this scratch British force performed, which says a lot for the traditions of the British army. Command broke down in the battle of Bergen-op-Zoom (generals behaving like subalterns was one contemporary criticism), but troops and officers behaved bravely and fought well. I would like to understand a bit more about how this sort of success was achieved.

Another intriguing point is how the political connectedness of the Guards casts a shadow on the writing of history. The conduct of the two senior Guards men, Cooke and Lord Proby, was questionable to say the least. But all the official criticism was heaped on others (especially the dead General Skerett) – and history has tended to follow their lead. And the whole episode is neglected, lest serious questions are posed. Some say that too much glory is given to the Guards at Waterloo (largely the same units – the second battalions) – which seems to reflect the same phenomenon, if with rather less justice. Also that Guards generals (the convention was that Guards could not be led by mere line officers) were often unenterprising, as Cooke was in this case. Proby, who was duly promoted to generalship later, is portrayed as downright defeatist and even (though Mr Bamford does not use the word, I will) cowardly. This Guards immunity is something historians and simulators need to allow for.

The attacks on Merxem lack the meat to make into a good wargame.  The attempt on Bergen-op-Zoom is another matter. It would be hard to do. You would need a much better map of the town than the ones in the book, though. And how you would allow for the fog of war and difficulties in communication I don’t know. But the forces are well balanced, and it should be an exciting game.

Three of the four British attacks gained entry to the town, and the forces on the failed attack were switched rapidly to one of the successful points. That gave the British more troops in the town than the French – but the British did not seem to know what to do once they got in. The French did not understand where the British were coming from at the start, and tended to overreact. But they acted decisively and made use of their central position. These are exactly the elements of a good game.