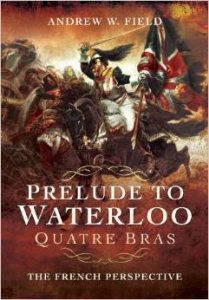 This book Follows Andrew Field’s book Waterloo – the French Perspective. This in turn follows a book on Talavera. I have read both earlier books. The book on Waterloo was excellent, though I was less impressed with his book on Talavera. And I would recommend this latest book to anybody who wants to understand more about the Waterloo campaign. It does not add all that much on the battle itself, but it still presents one of the most coherent narratives that you will find. It would, however, have worked better as a bigger book, written before rather than after his Waterloo one, and taking in the battle of Ligny.

Mr Field’s chosen angle is to concentrate on French sources. This redresses a gross imbalance in English language accounts, which depend heavily on British witnesses. More recently Germans have been getting the prominence they deserve, and even Dutch sources are being brought into the picture. The problem with focusing on French sources, though is that they are comparatively scarce, and most of those that exist have in fact been quite well used. Indeed it might be said that Mr Field’s job has already been done by Henry Houssaye, the French historian of the late 19th Century, who successfully married British research with a clearly French perspective to produce one of the best accounts of the 1815 campaign. Still further sources have emerged in the subsequent century, and Mr Field’s works offer more depth. But their main value is in the analysis. 19th Century historians can’t resist a rather polemical approach – deriving a lot of energy from attributing blame to this or that individual. Modern tastes are to understand “What happened and why,” to quote A.J.P. Taylor. So it isn’t enough to conclude that Ney, for example, was grossly negligent (or not) – we want to understand why he did what he did. This is the main focus of this work.

French sources on the battle of Quatre Bras itself are few. So few that in his recent book on the battle Mike Robinson ignored the French side of story altogether, to give his dramatic blow by blow account, drawing together individual accounts from British, Netherlands and Brunswick armies. Mr Field’s book serves as a complement. He covers the French side of the battle itself – but he takes a step back to look at the way the campaign evolved, the communications between the French commanders, and their strategic and grand-tactical decisions. Inevitably the marches and countermarches of Drouet d’Erlon’s corps, which failed to intervene in either of the twin battles of Quatre Bras and Ligny, commands much attention. This is thoroughly warranted, as it was one of the most important episodes of the 1815 campaign.

For a wargamer like me, this can be a tad boring. It does throw light on grand tactical communications and decision making – which is part of army level gaming – but you want more of the gritty battle detail. Field’s work here is a bit thin, but what there is is excellent. It is a succinct and coherent. He can fill in the gaps a bit too much with speculation (especially the fighting in the Bois de Bossu), but there’s a strong guiding narrative, backed up by some very clear battle diagrams. Since the French held the initiative for most of the day, you really have to look at their side of the story to try and make sense of it all. So this work is far superior to Mr Robinson’s in overall coherence. He also offers some interesting observations on French tactics – especially the use of skirmishers by the French, and the way their infantry seemed to avoid close combat with the British. For those interested in battle tactics, this is one of the most interesting aspects of an interesting battle.

He is generally convincing on the bigger picture too, pointing out the problems of command in Napoleon’s hastily assembled army. Ney had no time to prepare for the campaign, and started it with a single staff officer. He points out that a lot of the vagueness in and orders was because of incomplete information, and the hope that matters would be clarified in the next hour. Things were no better on the Allied side. He attributes blame for the day’s mistakes quite fairly between Ney, d’Erlon and Napoleon. Any wargamer wanting to model the French army in 1815 should allow that command was not as polished and coherent as it had been in earlier campaigns.

There are some niggles though. Mr Field is an ex-army officer, and is relatively new to serious history. He is getting better at it, but a certain lack of confidence still manifests itself. Some of his points end up being a bit laboured. He is also not as steeped in Napoleonic military matters as long-term wargamers like me (though slicker and more professional historians make mistakes too). For example he seem to think that French light Infantry regiments were specially trained light infantry on the British model. In fact they operated on the same tactical doctrines as all French infantry, where all infantry were expected to cover both light and line duties – though by tradition the Light regiments were favoured for light infantry tasks. Also I think a deeper understanding of tactics would arise by studying theatres where the British were not involved – a common failing for British historians.

Speaking of which, the battle of Ligny is a bit of hole in the account, when it is trying to take a strategic view of events. I think the work would have been more successful if this battle had been brought into scope fully – though it would have made for a longer book. I think there are revealing similarities and contrasts between the two battles – and it would certainly help get a deeper understanding of Napoleon’s views. That’s a quibble though – it is easy enough to understand why he didn’t do so.

A couple of other niggles. One of the crucial points about the day’s events is why Ney did not concentrate the forces on his wing more quickly. Mr Field shows some understanding of this, but I would like to have seen a bit more analysis to get an understanding of how easy this would have been to achieve in practice. A second is that the commentary on tactics could have been deeper – though he already goes further than many authors. In particular I’m not entirely convinced that the French dependence on skirmishers was purely a tactic to avoid confrontation with the British. Bachelu’s division, in particular, had suffered badly in its first encounter with Picton’s division. Perhaps after this it was simply too weak to consider anything more solid than skirmishing, relying on cavalry to do the rest. French accounts are thin, but an attempt to follow through what happened by regiment and battalion would perhaps reveal more about why things happened the way they did.

But these are minor quibbles in a work that is well worth reading. A century on, some might ask what the point is of yet more historical writing on the campaign. The answer is that so much of what has been written is formulaic and simply rehashes the work of its predecessors. There are too many ripping yarns and gratuitous controversies – and not enough of what happened and why. I am glad to say that Andrew Field’s work is about these last questions.