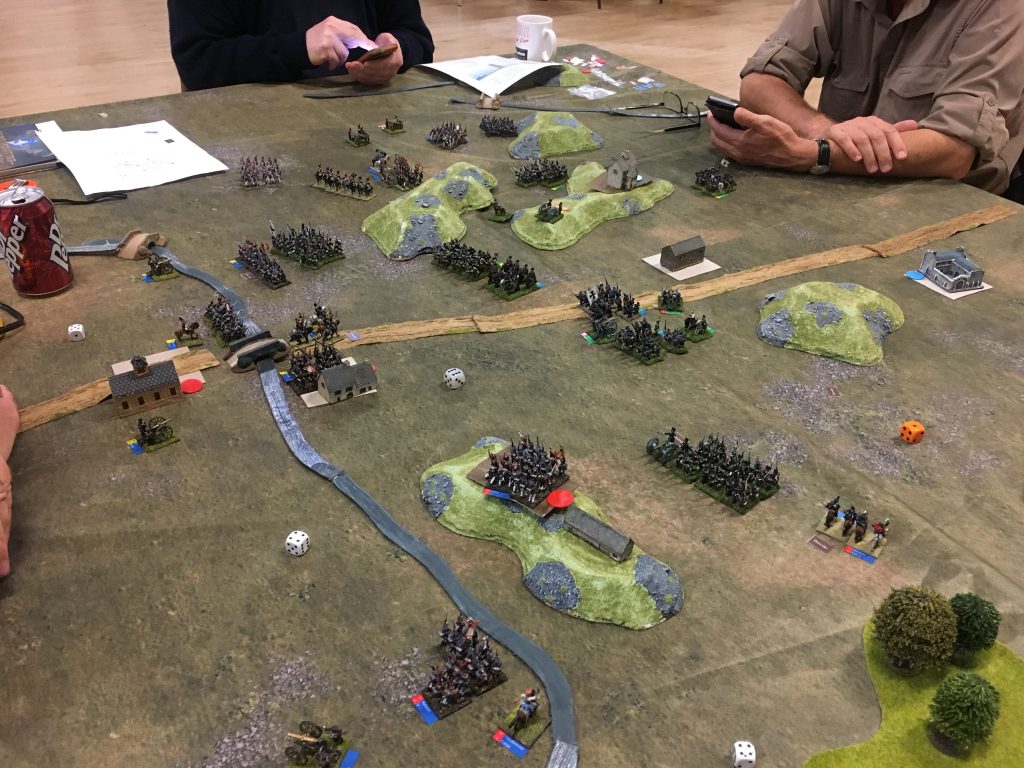 As stopgap measure I have been using Bloody Big Battles to give my Napoleonic armies an outing at the club. The scope of these rules is very similar to that for my Dining Table Napoleon, though the feel is very different, so this is a learning experience.

I reported on our first game, which was a contrived Ligny scenario. One of the learnings from this was how important scenario design is. That scenario was flawed, as I have found for all my loosely Ligny-based scenarios. I will try this battle properly one day, but it needs about double the number of troops on the table that I am currently using – and even that’s too much at the moment! What I have been looking for is scenarios with more tension and choices for the player. Ligny is a fairly straightforward slugging match; a combined Ligny-Quatre Bras scenario would be another matter…

I searched for ideas amongst the scenarios published in the BBB rule book , which covers the Franco-Prussian War, and the supplementary scenario book which covers other battles from the Crimean War onwards. These aren’t Napoleonic, of course, but quite a bit of effort has been put into scenario design to get a good game. Unfortunately these were mostly not obvious multi-player club night choices. The terrain was generally rather complex, and not feasible from the club’s bits and pieces. Quite often forces arrive later in the game – great for dramatic tension, but that means there is nothing for some of the players to do until they arrive. Nevertheless I decided that there was one I could work on: Koniggratz in 1866.

That might look strange. It’s a very big battle. The scenario book uses 2,500 men per base instead of the more normal 1,000 to 1,500. Even then it is double the size of the armies I thought we could manage in an evening with four players. But actually if you represent the forces at one unit per corps (about half size) it works reasonably neatly. The 1815 French, as the better quality army could take on the role of the 1866 Prussians, and the 1815 Prussians could stand in for the 1866 Austrians. I organised my armies into the 1815 units at 1,250 men per base (for the infantry) as this give nicely sized units (4 bases for the French infantry divisions; 4 to 6 for Prussian brigades). For the weakened Austrian corps classed as “Fragile” in BBB I used the mainly Landwehr brigades of III Korps (classed as Raw, not Fragile). The French I classed as Veteran, to make up for the superior armament and tactics of the Prussians in 1866. A large number of Prussians were not due to arrive until Turn 3, but it was easy to split the Prussians between the two players for the first two turns.

The next problem was the terrain. I used roughly the same distances as the BBB scenario. This was a bit of a gamble since I was using half the number of troops. I found that it wasn’t too hard to simplify the rest of the terrain into something that would present similar choices. I did not include the Austrian entrenchments; only the six villages counted as objectives were included (villages in BBB not having a big impact on play).  Although I couldn’t do the hills properly with what the club had (some other members had got to the ones I wanted first), I managed to set up something acceptable in under 30 minutes, we got the game going with four players.

By 10pm we had only got through three and a half moves, though; it needed eight. One player was new to the rules, the two others only had a single game. Even I had to look some things up. But even allowing for that it would be quite hard to finish the game in an evening, even with only six infantry and cavalry units per player. That was the bad news. The good news was that the scenario itself was much more fun. Each player had interesting choices to make. The gaps in the dispositions allowed some dramatic moves to be made. We decided to play it again as a daytime game at Pete’s.

What of the rules? Bernie, probably the most experienced of my co-players, was experiencing them for the first time. He didn’t really like them. Pete and Terry were quite happy; it helped Pete that he had played with the Fire and Fury system before. I think that Bernie was reacting against two major problems. The first is that the rules system was designed for a much smaller scale game (for the American Civil War) and so its mechanisms don’t feel right for the bigger scale. This is the same issue with have with Rapid Fire and Fistful of TOWs for WW2 games, except worse. The BBB system doesn’t have a Napoleonic feel for the smaller scale either. The musketry range is very short; there are no squares to combat cavalry; hitting a unit in the flank is not necessarily decisive, and so on. This means that it looks wrong both as a big division game and as a pretend battalion one.

The other problem is that losses are very lumpy. A lot of not very much happens (getting into and out of disruption) punctuated by occasional dramatic disasters. That’s because a casualties are by base removal, which are a very high proportion of unit strength. This doesn’t reflect a steady accumulation of casualties well at all.

I’m learning to live with these two problems. They do seem to come out in the wash by and large: you get a stimulating game with reasonably realistic results. However my DTN rules should address both issues. They will have an unabashedly big game feel, and I am working on ways to reflect accumulation of fatigue and casualties better – at the same time as being punchy. That’s the hope.

We’re learning how to play BBB. You really need to get units to combine and support each other, to accumulate as many advantages as possible in attack.  Head-on one to one collisions don’t achieve very much unless your objective is simply to delay. But there are aspects where I want to try and make the rules feel more Napoleonic. There are three things I am thinking about: cavalry, skirmishers and artillery.

The thing about cavalry in BBB is that it isn’t very special. It doesn’t fire; it has a longer move. That’s it. I used a Prussian cavalry unit to eject a French infantry unit from a village, unsupported by infantry. Bernie attacked one of my Prussian cavalry units with a combined force of infantry and cavalry (though it only succeeded in pushing it back a bit). The long cavalry move can mean that it appears out of nowhere to make an attack – especially in a game like ours with gaps between the units – though such attacks will be less decisive that people might think. It doesn’t feel right, but I still don’t know what to do. My first attempt to tackle this (long ago for a Waterloo game) was a bit of a disaster. I can think of a lot of possible tweaks but I’m not sure they’d benefit the game.

I’m much closer to developing something on skirmishers. I have rejected the standard BBB rule, which uses skirmish bases as part of the main body. I want to deploy small skirmish bases in front of infantry units. I have drafted a rule that does this, and which also helps the game. But, though I have stripped it down as far as I can, it’s still a bit complicated, and I want us to become more fluent in the main game system first.

My thoughts are altogether less developed on artillery. I think the game can take more artillery units on the table, and allow the possibility of smaller horse artillery units (which can move and fire) and howitzers (to supplement other artillery against cover).

Meanwhile I can take heart from the success of the scenario. I am starting to understand how to craft and adapt scenarios for these rules. Though I need something smaller for club night.