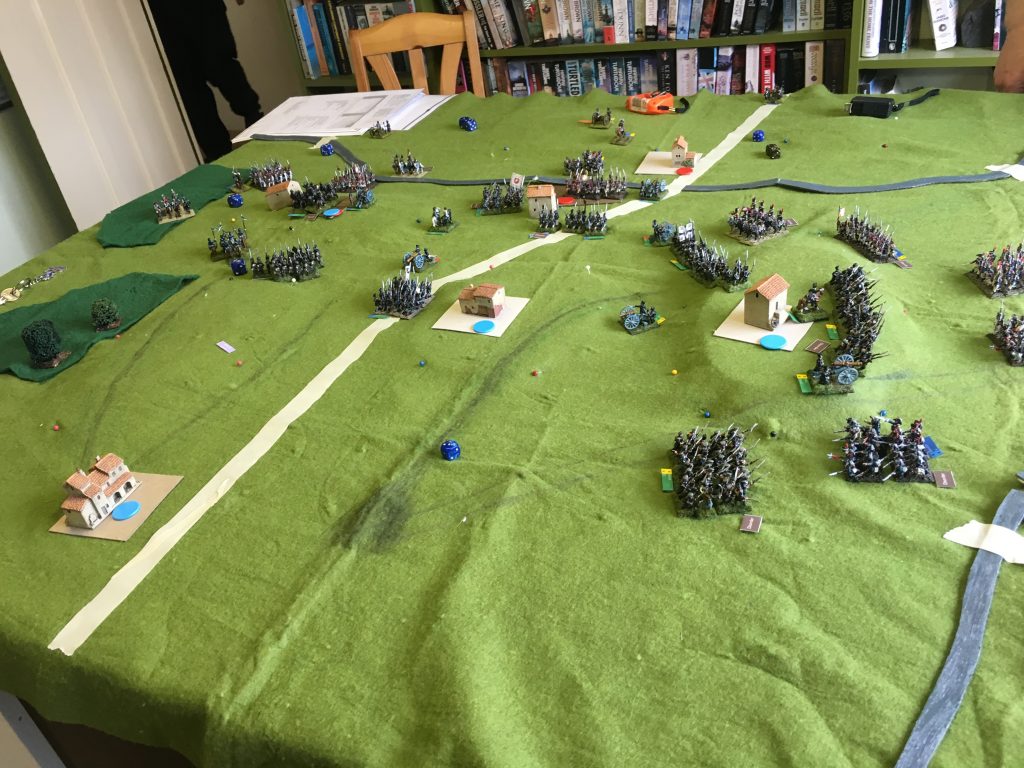 Our all day game with a Napoleonic scenario (not a real historical one…) was a success. We finished a well-balanced game which preserved tension to the last turn of eight. We were becoming fluent in rules, which provided a good, workable game system. What to learn?

The scenario was the same one we tried last time: a miniaturised Koniggratz transposed to 1815, between French and Prussians. The forces were half sized, the table 80% in linear dimensions (64% by area). The game  length was reduced from 9-10 turns to 8. The terrain reflected the original BBB scenario a bit more faithfully than our first game at the club, but was still simplified. Six villages were represented, five in Prussian hands at the start. The French objective was to take five. Four (leaving two in Prussian hands) constituted a draw, which is where we ended up. Neither side was particularly close to winning, but each could have.

The first points to reflect on are scenario design. Following the BBB scenario quite closely clearly worked. The standard BBB scenarios set a number of geographical objectives and a time limit, rather than destroying the opponents’ army. Each player controlled about five infantry and cavalry units and two or three artillery units. It took us a bit over half an hour a turn (about 5 hours in total). I don’t think we’re going to get much quicker. For a club night we’ll need to come down to a single corps each with about 3 units, with a more compact playing area (though ours was just 4ft by 5ft) and all the troops on the table at the start, and a five or six turn limit. Or the balance of the rules needs to change.

The problem with the rules is that there is a lot of slugging to no great effect. In our whole game the Prussians lost 7 bases out of 47, and the French 10 from the same number.  Only two units lost two bases. Mostly fire resulted in opponents being disrupted, and assaults in one side falling back 3 inches without a base loss. This is consistent with earlier outings. But how to make it crunchier? My first thought was that our experience was because weaponry was deadlier in the later conflicts that the rules were designed for. Except that our  fire factors have already been beefed up, based on suggestions in a magazine article (though these were more or less the only suggestions adopted). Perhaps it’s bad luck. Only two of our many assaults had a difference of 4+, which is a decisive victory, and there were only two draws, which wear units down quickly. Or maybe it reflects inexperience with the rules. The problem is to make combat deadlier without making it more capricious – which would mean one side suffering serious losses compared to the other from an ordinary bad run of dice. The only way I can think of doing this is fiddling with the assault table to that more combats resulted in the loss of a base by both sides. That’s playing with fire, but I don’t think that Napoleonic divisions were able to survive more than two or three hours of hard infantry to infantry combat, if you take exhaustion and ammunition depletion into account.

The next issue is Napoleonic feel. As I wrote last time, this boils down to cavalry, skirmishers and artillery. In this game we used cavalry to capture and recapture villages from infantry. The clashes between infantry and cavalry really don’t feel right. But this is an area that went badly when I last tried to tinker with it. One method might be to adopt the idea of “squares”, making infantry more vulnerable when not so formed, but less mobile when in square. Infantry also needs to be able to push away cavalry holding ground, when appropriate. But would it just be extra complexity for a slower game? Also cavalry should be more limited in difficult terrain. Funnily enough though I think the rules as they stand work fine for cavalry v. cavalry combat – better than most rule systems in fact.

Then there are skirmishers. We effectively accommodate this with a 6in musket range. I want to use skirmish bases. In principle this is easy. All musketry would be limited to 3in range. Skirmish bases would have a fire factor of 2, but no use against cavalry.  I have crafted an elegant draft rule on this, but my fear is that it just makes things fiddlier, and that players won’t bother with it. An alternative would be to incorporate a version of the main rules on skirmishers (with a skirmish base being part of the main unit formation), and link this to the extra weapon range.

And so to artillery. Artillery, rightly, has a big impact on the game. But each unit acts like a grand battery, while being much more flexible than was realistic, especially in evading threats. Two or more units ganging up can be very formidable. Each one is meant to represent 24 guns. One way of trying to handle this is reduce both the unit size and firepower (and also the provision for units to fire at reduced rate). The close range fire factor might be rounded down as well. We could just do this for horse artillery and give it extra mobility. In some ways this would not change things that much – given that each artillery unit would need a movement throw to move, and that artillery would take up more space (I may enlarge the bases), this could help.

The issue with artillery goes  deeper than this, though. Artillery and adjacent infantry units are treated as separate units. On more than one occasion infantry would retreat, leaving batteries isolated. In this game the isolated artillery showed a remarkable ability to survive.  It didn’t look right, even if it was possible to rationalise it.  In fact artillery had two distinct uses: one was close support to divisions, and the other was forming grand batteries at corps or army level. The rules don’t do a particularity good job of reflecting the former, while they make the latter the manoeuvrability of single batteries. It doesn’t scale up so well from the original Fire and Fury. One idea is to allow artillery to be attached to infantry units, allowing them to fight as joint units. When not doing so, artillery would suffer an automatic walkover when assaulted, though they may still stop an assault in the fire phase (unless defending works, maybe). This approach would work better with the smaller artillery units.

Finally on potential rules revisions I am thinking of a different treatment for built-up areas. This is to treat building models as obstacles, rather removing them when the villages or towns are occupied. The models have to be quite small (though the 6mm I use are fine), and in larger areas you have to have streets wide enough to take bases. This is a bit more complicated, but the internal layout of built up areas did matter.

How do the rules look historically? The French outfought the Prussians: numerical equality left them with a clear upper hand. This was mainly achieved through rating the French as Veteran (with a small number of elite units counted as Aggressive) and the Prussians Trained or Raw. But the Prussians but up a pretty good fight. This feels like the right balance for Ligny and Waterloo – though how to bring the British into this is an interesting question. (I suspect many British units have to be rated Aggressive or Devastating Volleys as well as veteran; many French may be rated as Fragile). The main problem historically is that things are taking too long if one move is meant to represent one hour.

Which leaves me with a dilemma. Is BBB broken enough to fix? If you start fiddling with settled rules systems you quickly run into unintended consequences. Or you make them more complicated to no great purpose. I hesitate.