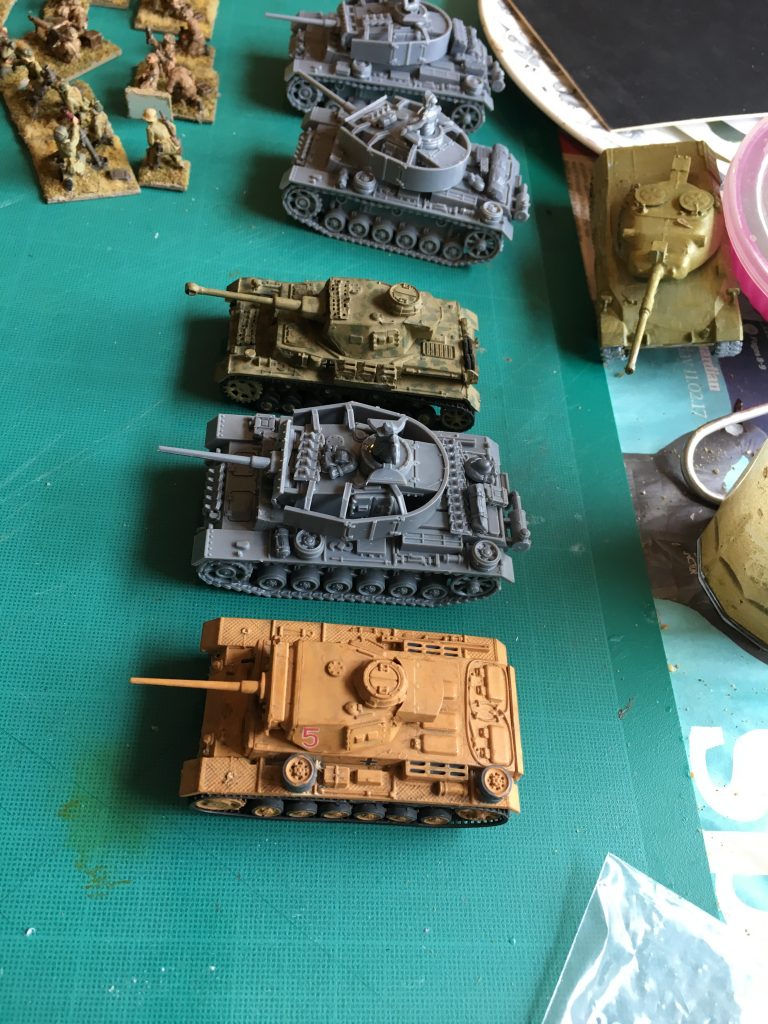 I started my 1943 project with a couple of Pak 38 50mm anti-tank guns, and two 81mm mortars for the Germans, and a 6pdr, two 3in mortars and two Vickers machine guns for the British. These were trials for painting and basing techniques. I will come back to them. I want to start my regular blogs with a full-scale platoon. These are Panzer IIIL/M tanks, with the long 50mm guns, using the 1/72 plastic kits from Plastic Soldier Company (PSC).

Why these? I wanted to break away from the late-war pattern of games being dominated by superior German armour. This is what happened with my initial game and its Tigers. So I thought that one platoon of Pz IIIs and one of Pz IVs would be the core of my German tank force. I already had the Pz IVs (Airfix F2s in 1/76), so I thought late Pz IIIs would work well beside them. I had two 1/76 models in my collection, not enough for a platoon. One was a conversion from an Airfix StuG III model (my first ambitious armour conversion), and the second a Matchbox model, which came out after I had made that model (rendering the need for that conversion redundant), and which doesn’t look too bad beside it. Rather than try to find a 1/76 model (like the Matchbox one) and make that up, I though I would try out PSC’s fare, designed for wargamers. The surplus models could then be used as Ns, with the short 75mm guns, to operate alongside my Tigers, as was the German practice at this stage of the war (the Pz IIIN in the Bovington tank museum was captured in Tunisia alongside its famous Tiger). So I ordered a box of three PSC Panzer III J-Ns.

When I opened the box I found the models up to expectations. I quickly decided that the PSC models should be made up as a complete platoon. I could use the parts in the box to make the Ns from my existing models. I then realised that in the sorts of games I was likely to play, I would only want to use one model for such supporting weapons as the N. The other model could be used for an FL, the flamethrower version. There is a picture of one these, knocked out, at Salerno, which is becoming the central campaign for my project, so I know they are in theatre. I can use the Matchbox model for that, and my conversion can be the N, as that means I can discard the rather ropey mantlet that I made for it.

The next decision was what sort of Pz III for the main tank platoon. My first idea was an L, like the Matchbox model, done up in Afrika Korps colours, as seen in Tunisia (to face of against my Grants, which never made it to Italy, and which I plan to do in desert paint). But as I started to focus on Salerno as my central campaign, I decided to go for M, with its schurtzen – spaced armour. However, since the Germans in Italy mainly only kept the schurtzen on the turret, I would skip the side-skirts. Apparently the narrow roads in Italy made the side armour more trouble than it was worth.

And so on to assembly. I decided to assemble the complete model, including commander and stowage, before painting. I think this adds to the artistic coherence of the resulting model (if I can be so grand) – but we’ll see how that goes. Assembly took slightly longer than I thought. It needs to be done carefully, and the first one took me nearly an hour, in spite of it having many less parts than the old models of my youth (most of the wheels are moulded into the track assembly, for example). Particular care was needed on the turret shurtzen, as this is in two pieces, and the join needs to be as inconspicuous as possible. A modelling knife and file were needed to deal with the sprue attachment points. The next two models were much quicker, perhaps half an hour each. Mostly the mouldings were of very high standard, and fitted together very neatly. The one problem as a bit of a dimple on the extra armour plate on the front hull below the turret. I have tried to fill this in using a bit of gesso (as well as using it to cover the join on the schurtzen). I used to use a product called “body putty” for this, but I don’t have it now and haven’t seen it on offer anywhere. We’ll see if the gesso works.

After the main assembly, which included the tank commander poking out of the turret (in contrast to the closed turrets of my youthful models), I added various items of stowage. These I got from a separate PSC item of tank crew and stowage. I was a bit underwhelmed by this offering, which consists of three identical sprues, with crew figures (for poking out of hatches), jerry-cans, bits of track, tarps and ammunition boxes, and other bits. It also has various small arms. I used one of the crew figures, to contrast with the two alternative poses that came with the main kit. And tarps and jerry cans from one of the sprues. The original kit comes with a few short lengths of track, which are useful. Mostly I piled things up on the rear hull, as this seems to be where the stowage mostly went in practice, with a few other bits elsewhere. We’ll see how it looks in the final mode, but it looks promising. One nice thing is that stowage helps to individualise the tanks.

The next point to ponder was a radio antenna. These are almost never provided in models of this scale, but can add a lot to the tabletop appearance (it is tricks like that, rather than detailed painting that lift the appearance of tabletop models). However, with the Pz III (and Pz IV) there is a problem. They had a big aerial poking out of the track guard next to the turret.  It got in the way of the turret gun as the turret rotated. They were design so that they would fold down when this happened – they could be folded down by the crew in advance (in the case of the Pz III this could be done from inside the tank). In many photos the aerial is folded away. Rather than find ways of dealing with the issue on models, I decided to model with folded aerials, allowing the turret to rotate fully. The mouldings represent this quite adequately. Did this mean the radio was not operational in combat? Or just that the range was reduced? No doubt I will find out in due course!

And now to the big issue (before painting – which I haven’t got to yet). How do they look? Generally excellent, but there is a problem. They’re quite big. Modelled at 1/72 I expected that – but I was surprised at how well my two old Tigers worked together (one at 1/76, the other at 1/72). I have a suspicion the PSC models are a tad over-scale. Putting the PSC models next to the Matchbox model (in front in the picture), and they look a lot bigger. They even look bigger than the 1/76 Pz IV (also in the picture). What also doesn’t help is that the moulded plastic tracks are a bit prouder than the flexible polythene ones on the older models. Part of the point of my project is to re-use my old models, if only for old times’ sake, but this going to need more care than I thought. Most modern plastic models are 1/72, so I going to have to find ways of living with this. And these are much cheaper than the 1/76 resin models from people such as SHQ and Milicast. Still, let’s not exaggerate. The different scales can be kept in separate units (except the Tigers, which I think are OK).

But the next point is to finish these models. This means handling another set of issues – which I’ll deal with in my next post.