My hope was not to spend too long messing around building up the armies for my 1943 project, but to get a small club-ready game as soon as I could – and for that game to look something like the finished product on the table – without the fielding of half-finished elements. I want a bit of a wow factor – in contrast to most of the games I play at the club.

So the logical thing was to build a tank and infantry platoon for each side, plus some command and support elements, and then turn to the scenery, with some thought for player aids (markers for knocked out vehicles. etc). I did the support elements first: mortars, heavy machines guns (German ones still need to be painted) and anti-tank guns. I now have a German tank platoon. But after that I need a bit of a rethink.

The obvious next step is to work on a British tank platoon. My first idea was to paint up my old Airfix Shermans. I’m not happy with that, though. The old Airfix models won’t be up to standard next to my new Pz IIIs, both because of size (they are 1/76 rather than 1/72) and general quality. The final straw was realising that I would not be able to open the hatches and put crew figures in. I think this adds to the appearance – and mostly commanders would only want to pull the hatch down in extremis – visibility is so much better outside. I still want to paint these old tanks up, and to use them to bulk up for larger games, and to provide a few extra options on the table (the Tigers for the Germans, for example). But for my first British tank platoon I’m going to need some new models.

And it is pretty obvious what those models should be: Shermans. In 1943 they dominate British armour. It’s true that in Tunisia you also have an assortment of other tanks: Grants, Honeys, Valentines and Crusaders (as well as Churchills, which continued into Italy). But few, if any of these make it to Sicily, let alone Salerno. And the Sherman type that predominates at this stage is the Sherman III, the US M4A2. This came with a diesel engine and was mainly used for export (to Britain and Russia). The examples I am most drawn to belonged to the Royal Scots Greys at Salerno. There are a few pictures, and they were heavily engaged. These have the classic sand-skirts covering a the top part of the running gear (as did the desert tanks) – though not all British/Canadian Shermans had these in Sicily or Salerno. It turns out that the Airfix Shermans aren’t such a good match for these anyway – they don’t have the engine deck for the M4A2, and no track-guards at all. Apparently they aren’t a precise fit for any known version of the tank, but look not that bad for the earlier Sherman I. My first point of call is now Plastic Soldier Company (PSC) – their products seem to have just the right balance of production values and options for me. But they only have the cast-hull M4A1 (Sherman II in British service – used in North Africa, but I haven’t seen pictures of them in use by the British in Italy) or the M4A4 (Sherman V) which had a longer engine deck and more spaced out wheels – though both seem to come with the sandguards as options. Neither is going to work.

After doing a little research I thought I had the answer: the Armourfast M4A2. Armourfast (who now produce models formerly by HAT) produce cheap models with few parts and low cost (£7.50 for a pair – compare PSC £17.50 for thee) for wargamers – but which are crisply moulded and accurately proportioned. I bought a box (alongside another couple of items). It was a bit of a shock. There is one simple sprue per tank (PSC have 2 bigger sprues each), and no options, stowage items, crew, etc. I actually knew this would be the case from reviews, but it was quite stark when I opened the box. But I thought there would be sandguards (from either misreading a review, or a review based on an earlier version). And the mantlet is the later war version, though I think this might be convertible. While pondering this I discovered Italeri made a version of the Sherman that was exactly what I was looking for, so I immediately ordered a couple of boxes (4 vehicles) – but they haven’t arrived yet. I will do something with the Armourfasts, but I haven’t decided what yet.

So how about the infantry? But there’s a problem here too! I fell in love with the AB metal figures, and bought a batch of them for command and support elements. It is these that I have painted up for the mortars, machine guns, and a 6-pdr crew. They are lovely figures. But the more I looked a pictures from 1943, the more I realised they weren’t quite right. The soldiers wore a hybrid between the 1944 north Europe kit most popularly portrayed in miniatures (including these AB ones) and the 1941/42 desert kit, also widely available, including at AB. This is within fudge range for the Germans, and can be covered mostly with a paint job. They mainly wore helmets in Italy (caps dominate in Afrika Korps representations) – and from a distance you can’t tell whether they are wearing shirts or tunics; no doubt some Afrika Korps figures can be mixed in to give more of a tropical look – these are usually made wearing trousers rather than shorts. For the British it’s a bit harder. They mainly wore trousers rather than the shorts they wore in the desert – but the helmet is an earlier version than 1944. They too typically wore shirts rather than the battledress blouse, and they usually had sleeves rolled up. I was going to overlook all of this (so at least my infantry would look OK for later war scenarios in Italy and France), but I saw that SHQ (whom I’m using for harder to get model vehicles) had a Mediterranean series for both British and Germans that might be suitable. Representing human figures is a very personal thing, though, and I don’t know if I will like them. I ordered some examples to take a look. That was last weekend and they haven’t arrived yet (it’s August I guess).

So what I think I will do next is a large batch of upgrades to my existing 1/76 German tanks: 3 Pz IVGs, two Tigers and two Pz IIIs (which I will convert to a Flammpanzer and an N with short 75mm gun). Since the paint I so laboriously mixed up for the Pz IIIs is still on the go, this makes some sense. I also have more idea about how I want them to look than I do with the British. I’m not going to attempt the sames standards of finish as the mainstream elements, but I will take on some new challenges, such as representing the radio antennae. Here they are, with conversion work on the Pz IIIs under way: 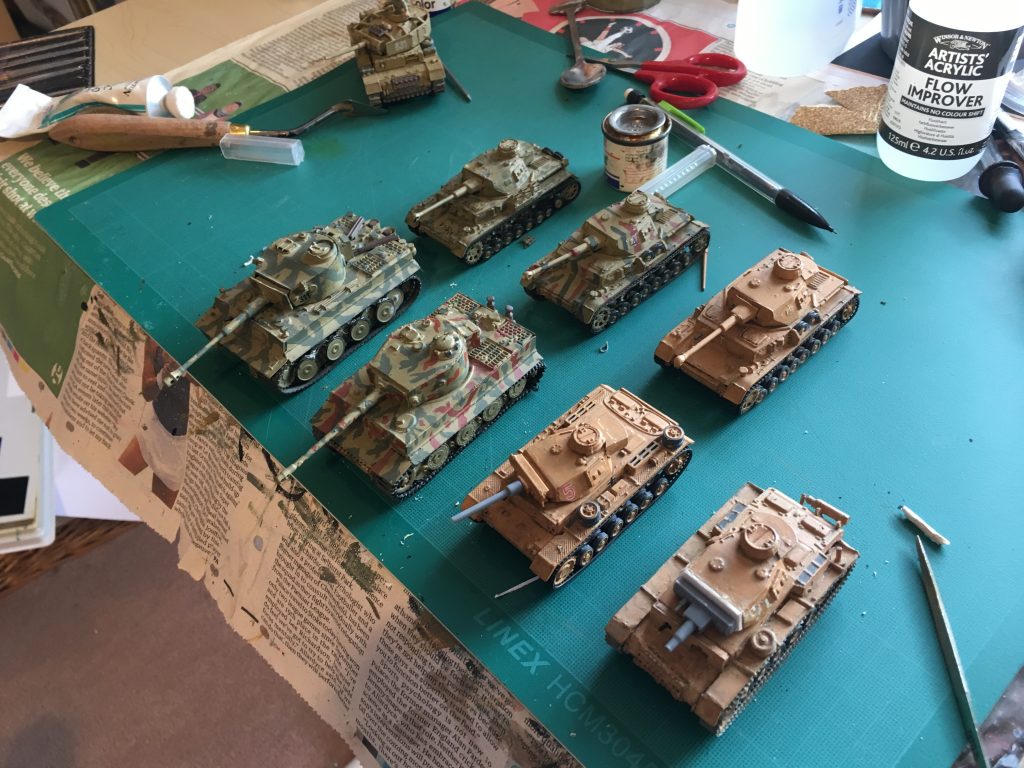