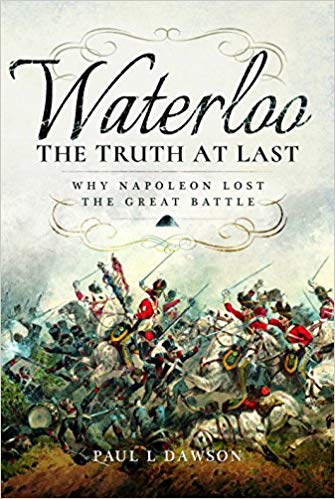 This is an utter disaster of a book. I was very critical of Paul Dawson’s companion book on Quatre Bras, but I started this one on the main battle of the campaign more hopefully. But that wasn’t to last. I have gained a few new insights, but I would only recommend this book to Waterloo fanatics who don’t have a blood pressure problem.

Mr Dawson’s claim to have found the truth rests on some new data that he has unearthed in 2016 from the French archives, with unit rolls and casualty reports. The best bit of the book is the Introduction where he explains what these are and what he did with them. If he had confined himself to presenting this material along with some basic interpretation, then this would have been fine. Alas he wanted to write a much bigger book in too short a space of time – a task that would have defeated a more talented writer than Mr Dawson.

What to say? Based on another book I have been reading, it is a very left-brained affair. Right-brained skills of common sense and grounding in context are absent, as is any empathy for the reader, or anybody else. There is a lot of formulaic repetition, and the book is padded out with short biographies of the French participants that really don’t tell you very much at all. A few of these would have provided a bit of colour: repetitive lists should be in an appendix if they are to anywhere, rather than interrupting the main text. A lot of his conclusions look very shaky. For example he rightly puzzles about the high casualties suffered by Donzelot’s division in d’Erlon’s corps. He points out that it was not hit by the cavalry charges which destroyed Marcognet’s division – something that I did not know, but for which he provides compelling evidence. He then assumes it must have come from attacks on the farm of La Haye Sainte. Elsewhere he criticises historians for describing the battle for Hougoumont as a version of Rourke’s Drift. But if he’s right about Donzelot, the battle for La Haye Sainte, was a Rourke’s Drift with muzzle-loading muskets and rifles in place of the Martini-Henrys. In fact the issue is mainly to do with large numbers of men posted as missing – and I suspect this has something to do with being caught by the Prussians at the end of the battle while the French army was disintegrating. That’s just one example of how he makes breathtaking leaps to conclusions, while criticising others for wandering beyond the evidence.

Alas weak analysis and loads of extraneous data are far from the only problems. There appears not to have been an editor. This is not something publishers do these days, so authors have to rely on their own self-criticism and make use of friends. But Mr Dawson doesn’t seem to be a good self critic, and probably was in too much of a hurry to allow friends to do much editing. The book is disorganised (the chapter heads are random), riddled with errors and in places incoherent. There are many quotes, which Mr Dawson mostly leaves uninterpreted (he said something somewhere about letting them speak for themselves). Often these are in the wrong places, sometimes they appear more than once, and frequently  it isn’t clear how he draws the conclusions from them he does. And much of the analysis is contradictory. For example he bangs on quite a bit about how Lobau held off the Prussians for hours near Frischermont, before later concluding that he must have retreated rather rapidly, given his low casualties. There are no maps. Maps are more than just a decoration. They make things much clearer for a reader and force authors to face up to contradictions in the evidence. This failure is evident in his extremely confusing account of the Prussian advance to Plancenoit.  Contrast this with Mark Adkins’s account (which Mr Dawson likes to pick holes in), where maps are central to the narrative, and he presents a clear account of the same episode.  Of course, trying to put together a clear account of this complex battle with its many contradictory sources, with maps, and disciplined editing takes time – and this work was published not much more than a year after its central research. So he should have attempted something much less ambitious.

So what were the useful bits? The new data clearly has value. But it is problematic. The casualty data was compiled in chaotic conditions after large numbers of men had deserted, and others and had been rounded up as prisoners. There are large numbers of missing. So it is very hard to separate the battle from the aftermath. Mr Dawson does try to take this on, but not very successfully. The most useful thing I learned was about d’Erlon’s first attack. I have already mentioned that he shows that Donzelot’s division was not broken by cavalry at this time, which almost every account I have read has suggested. The data also help clarify what happened to the other divisions. This is very helpful. When devising wargames rules, I keep coming back to this episode to see how well any new system copes. That it now appears that the three regiments of the Union Brigade concentrated on just Marcognet’s division (and then moved on to one of Durutte’s brigades) makes much more sense of things. Another valuable insight comes at the end of the book when he looks at the data on the level of experience of the French army. He convincingly shows that it was not composed largely of veterans – but was comparable in experience to the Prussian, Netherlands and Hanoverian contingents (and unlike most of the British, which were in true veteran formations). The Guard seems to have been a shadow of its former self. This is contrary to what many historians have claimed, but does help make sense of both Waterloo and Quatre Bras.  I am also a bit clearer on what happened at Hougoumont, where the involvement of the different French regiments was very variable; not all of them seem to have been fully committed.

That’s about it. I am left with a number of mysteries. First and foremost is the advance of the Prussians. I really can’t make sense of the sequence of events – though Mark Adkins’s version looks entirely plausible. I want to do more work on this, and maybe I will find some nuggets if I trawl back through Mr Dawson’s book. But the absence of evidence from the French side must itself be quite revealing. I haven’t been able to find much from the Prussian side either – and Mr Dawson doesn’t seem to have bothered much with the Prussians, in spite of lecturing us on how important this episode was to the whole battle. This runs alongside the other big mystery of the campaign, which is why the Prussians did so badly at Ligny. One theory, that the French had tougher, more experienced troops is now looking shaky. Back to Waterloo  another mystery is why Bachelu’s attack was beaten back so easily. Mr Dawson makes a big deal on how this episode is overlooked by historians, but doesn’t throw light on how the whole division appears to have been beaten back by four battalions of the KGL in square formation. One theory is that they had been messed up by the fighting in Quatre Bras – but in his other book Mr Dawson suggests that they were not as heavily engaged as many thought. Perhaps they were low on ammunition?

Waterloo is the gift that keeps on giving. You would have thought that after all this time we would be quite clear on what happened. Alas no. This book offers some new evidence, but isn’t worth over 500 pages.